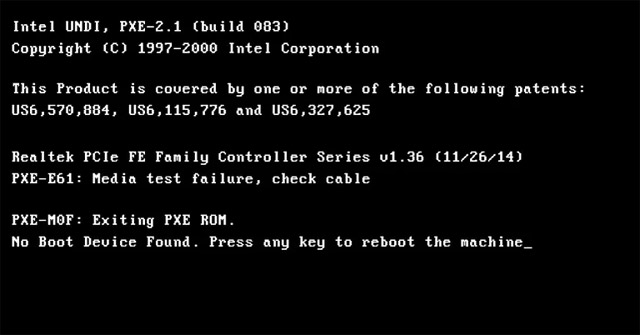 The PXE-E61 errors are related to the Preboot eXecution Environment (PXE), which is supported by some motherboards. PXE is a special boot mode that allows the computer to search for and load a bootable operating system over the network instead of from a local hard drive.

When does the PXE-E61 error message appear on the computer?

Usually, the PXE-E61 error message appears on the computer when the user accidentally starts a network device that does not actually exist. This is usually caused by a misconfigured setting in the BIOS, but it can also be caused by a failing hard drive.

These are the most common errors associated with PXE:

Before the computer boots, PXE-E61 errors are displayed, typically in white letters on a black backdrop, with additional text displayed above the problem.

How to fix error PXE-E61

1. Change the boot order in the BIOS to boot from the hard drive instead of the network. This will force the BIOS to find an operating system installed on a local hard drive, which is how most computers are set up.

Important note: Please do your best to complete this step. Change the Boot menu search and make sure the Boot Drive Order (or similar) screen shows the hard drive but not “No Boot Drive.”

2. If the BIOS does not detect the hard drive, turn off the computer, open the computer case (if you are using a desktop computer), and make sure the HDD cable is attached properly.

3. If you are trying to boot from a USB device, such as an external hard drive, make sure the device is indeed bootable. Otherwise, the BIOS will find another device to boot from and may try to use the network, thus generating the PXE-E61 error.

You can use a program like Rufus to create a bootable USB device.

Also double check that the boot order is configured to boot from USB, the device is fully connected, and the USB port is not faulty – try moving the device to another USB port if you are not sure about this. 4. If you don’t want to use PXE, go into BIOS and disable it. It will be called Boot to Network or Ethernet, and is usually found in the Boot menu.

5. If you want to use PXE to boot into a network device, check that the network cable is plugged in correctly. Without a solid connection, PXE will not be able to connect over the network and will generate a PXE-E61 error.

Replace the cable with a new one if you suspect that the old one is damaged.

6. Update the network card driver to fix the PXE-E61 error. Outdated or corrupted drivers can prevent the computer from accessing the network, which will prevent PXE from working properly.

Note: Since you can barely boot your computer to update network drivers, try to boot in Safe Mode or change the boot order to use the local hard drive first. After updating the network card driver, try to reboot the network again.

7. Reset BIOS. Resetting the BIOS to its default options should be able to clear the error if the PXE-E61 error is caused by a misconfigured BIOS setting.