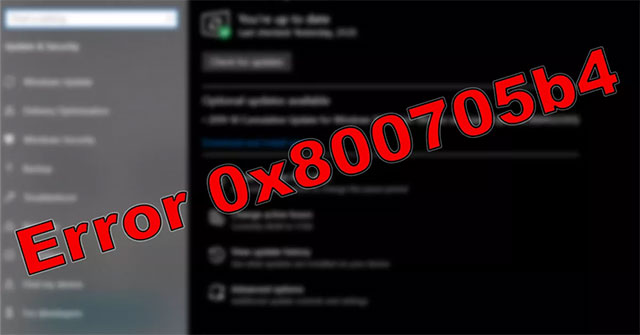 Keeping Windows up to date is paramount if you want to get new features and, more importantly, the latest security patches. Sometimes Windows update errors come from you and can also be due to Windows errors.

Windows update error 0x800705b4 is a weird one. It usually appears when you try to complete a Windows update or if the update scheduler fires at the specified time.

There are several causes for the error, namely an issue with the service itself and Windows Defender getting in the way. But narrowing down the root of error 0x800705b4 involves trying many different fixes, so the article won’t focus on the symptoms but on potential fixes instead.

There are a few different ways you can try to update Windows 10 properly. Nothing is too complicated. We’ll start with the easiest and most likely way to succeed:

Note: After each fix, you should restart the system and try to update Windows again.

1. Run a virus scan: This seems unlikely, but sometimes Windows errors can be caused by malicious software such as viruses and malware. Running a virus scan can help fix that. If you haven’t already, you can install an antivirus application and then run it to make sure nothing nefarious is lurking in the system.

2. Run the Windows Update Troubleshooter: The Windows troubleshooter is a great way to try to figure out what’s wrong with your system. Even if the tool doesn’t fix the error, it can point you in the right direction.

3. Reset Windows Update: It is possible that certain components of the Windows Update process were corrupted for some reason. There is an automated script that you can run (you can download the script from Microsoft). If you prefer, you can also run the manual update process.

4. Run the System File Checker scan: Another way to potentially fix this update problem is to use a file checker app. It can be activated with a simple command: sfc/scannow. There are also a few other sfc commands worth learning if you’re interested in the versatility of this tool.

5. Run a DISM scan: You can also try running a Deployment Image Servicing and Management (DISM) scan. This tool is less likely to troubleshoot than the methods above, but it is easy to use and can fix some potential problems.

6. Change Windows Update settings: It’s possible that an unnecessary Windows component in the update is preventing it from downloading. Focusing only on the critical elements of Windows can fix that. Remember, if you disable Windows Automatic Updates, be sure to turn them back on again when your issue is resolved so you don’t miss any important security updates.